Home Business News Could an online sales tax save the high street? A Belfast bookstore has its say

A REPORT into how the UK government can support high street businesses after Covid-19 was recently published, with many suggestions being put forward by the committee involved in its creation.

Published on 1 December, the ‘Supporting our high streets after COVID-19‘ report from the Levelling up, Housing and Communities Committee has recommended a full ‘lessons learned’ review on the high streets be conducted immediately, ahead of the main independent Covid-19 inquiry.

The committee has also supported the principle of an online sales tax, which would seek to level the playing field between bricks and mortar businesses and online-only operators.

Currently, business rates disproportionately affect retail businesses, with the industry representing 5% of the UK economy but 25% of business rates.

“This disparity is exacerbated by the fact that online retail commands a lower business rates bill: brands that are only online do not have high street stores on which to levy business rates, and warehouses for storing online goods tend to have lower rateable values and therefore pay less in business rates than an equivalent high street property,” the report said.

It also stressed that the tax should not penalise retailers that have both an online and brick-and-mortar presence.

One business that operates in this was is Books Paper Scissors, located in South Belfast.

Opened in 2017 by Linda Murray and her husband, it is a small independent bookstore that has seen witnessed first hand the impact of the pandemic and restrictions on footfall in the area.

“We’re in a location which is not in the city centre – we’re beside a park, museum and a couple of cafés, and its a very student area,” Linda told the Irish Post.

“We had a huge difference in our footfall when the students weren’t around. They really made a massive difference.

“We’re directly opposite the Ulster Museum and even when retail was allowed to open, it took a good couple of months before the museums were allowed to open. We’ve had very varied footfall patterns depending on what has been allowed open.” 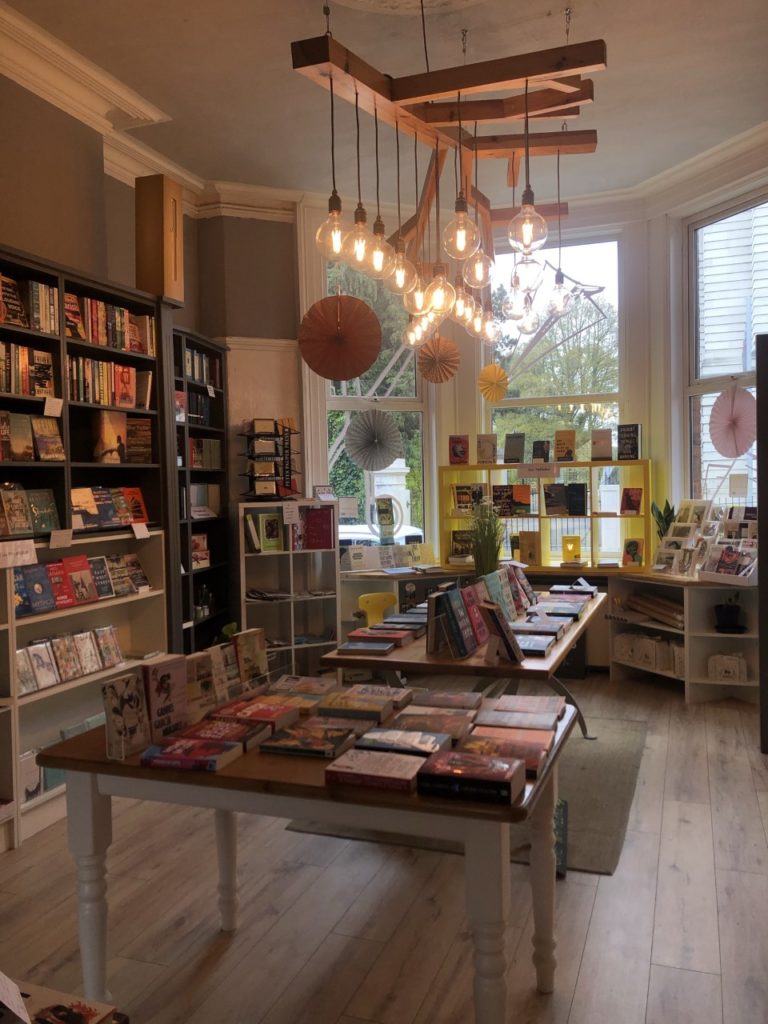 Inside Books Paper Scissors in Belfast.

However, Linda believes that the business has benefitted in some ways from being just outside the busyness of the city centre.

“For months and months people avoided the town centres because they didn’t want to engage in that busy traffic,” she said. “Particularly the older customers would risk a little trip to or shop but they wouldn’t have set foot in Waterstones.

The pandemic also saw the business reinvigorate its online presence, with Linda’s daughter acting as a local delivery driver for online orders.

The idea of an online sales tax as suggested in the report is not something that Linda believes would greatly benefit independent stores.

“There will always be people who want the convenience of an online order and they won’t physically put their boots on the ground,” she said.

“A penalty to Amazon, for example, wouldn’t really work because there’s so many people to make up that penalty.

“What I think would work is if people who were shopping online for a certain product were told that they can source that product, via Amazon if needs be, from an Irish supplier. I think people are utterly clueless that they are buying a product from France or China – they don’t think, they just click and it’s at their door.”

A High Street Voucher Scheme was recently launched in Northern Ireland to improve the situation for stores in the region.

Those who signed up each received a £100 voucher with an expiry date of 19 December 2021, forcing the voucher to be used quickly, and the voucher can only be used in physical shops.

Linda said the scheme has been fantastic and that consumers have been using the vouchers responsibly.

“We’ve had people come in and spend the full thing in here, and I don’t think that would have been spent if it was their own money.”

The committee’s report further delves into the future of high street, reflecting on the continuing rise of online retail and the increase in hybrid working. It highlights the need for local planners to consider a mix of uses and experiences for high streets and town centres that best meet the needs of the local area.

It also emphasises the need for high streets to be well-planned in the round and with plans updated regularly to keep pace with changing trends, stating that “a plan that is more than five years old will do little to support a high street for the future”.

Clive Betts, Chair of the Levelling Up, Housing and Communities (LUHC) Committee, said:

“The Covid-19 pandemic dramatically changed our high streets almost overnight, with the pandemic accelerating existing consumer trends and introducing new ones. To help build the resilient, thriving high streets of the future, it’s vital that Government facilitates a long-term, holistic approach both to the planning and to the regeneration funding of our town centres.

“The Government should look at how it can support strategies which bring together local councils, business partners, and the local community in developing high streets which capitalise on local heritage and experiences and which combine a mix of uses, including retail, hospitality, green-spaces, and arts and culture.”

In Ireland, government supports have come in the form of Trading Online Vouchers to assist small businesses with up to ten employees with €2,500 to trade online, among other initiatives.

Business loans up to €25,000 and credit guarantee schemes have also been implemented, however a voucher scheme similar to the one in Northern Ireland, or a widespread report into the future of high streets have yet to be looked into.