A FAMILY-RUN grocery serving the large Irish community in south Manchester is about to celebrate an impressive 90 years in business.

The Booth and Howarth store was founded in 1932 by Les Howarth and his business partner Mr Booth.

Today it is run by Mr Howarth’s grandson Andrew Howarth, who has transformed the shop into something of a mecca for the local Irish community.

With the third generation of Howarth’s now in charge at the store – which is located in Burnage – it has changed somewhat over the years.

“The most compelling side of our family business is how much it has changed over the years,” Mr Howarth explains.

“At inception in the early 1930s my late grandfather Les Howarth opened a small shop with his business partner Mr Booth.

“Sadly, Mr Booth was tragically killed in a motorcycle accident, but out of respect his name still belongs outside the shop, as without his backing we would never have got started, as my grandad didn’t have the capital.”

He adds: “It then moved to the second generation, when my father John and his brother Rod managed proceedings from 1970 right up till 2005.

“During that period they bought the shop next door to expand.

“Now in its third generation, run by myself Andrew Howarth and David McDermott , we have just undergone a big refurbishment, including the instalment of a Costa Coffee station, to ensure the store is keeping up with the times.” 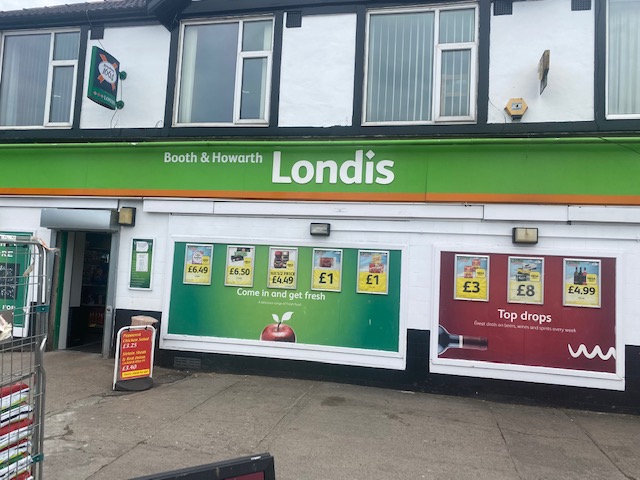 The Booth and Howarth store is celebrating 90 years in business

The newly refurbished store also now stocks some 150 Irish products – such as Club drinks, Clonakilty sausages and bacon, Kelly’s of Newport, Co. Mayo and Irwin’s Bakery – as well as a wide selection of county papers.

Booth and Howarth began their expansion into the Irish product sector two decades ago, when Mr Howarth spotted a gap in the market for their local community.

“About 20 years ago I realised that there was a large Irish community in south Manchester and that we could potentially cater for them,” he explains.

“What started off as a box of puddings and a case of soup has now expanded to us selling around 150 Irish products covering all the major suppliers.”

He adds: “We have a loyal Irish customer base and would relish the opportunity to show new customers around our brand-new refurbished store as we approach our 90-year anniversary.

“And we would welcome as many members of the Irish community as possible to help us make our magical 100-year anniversary at the end of this decade.
“That would make me a proud man.”