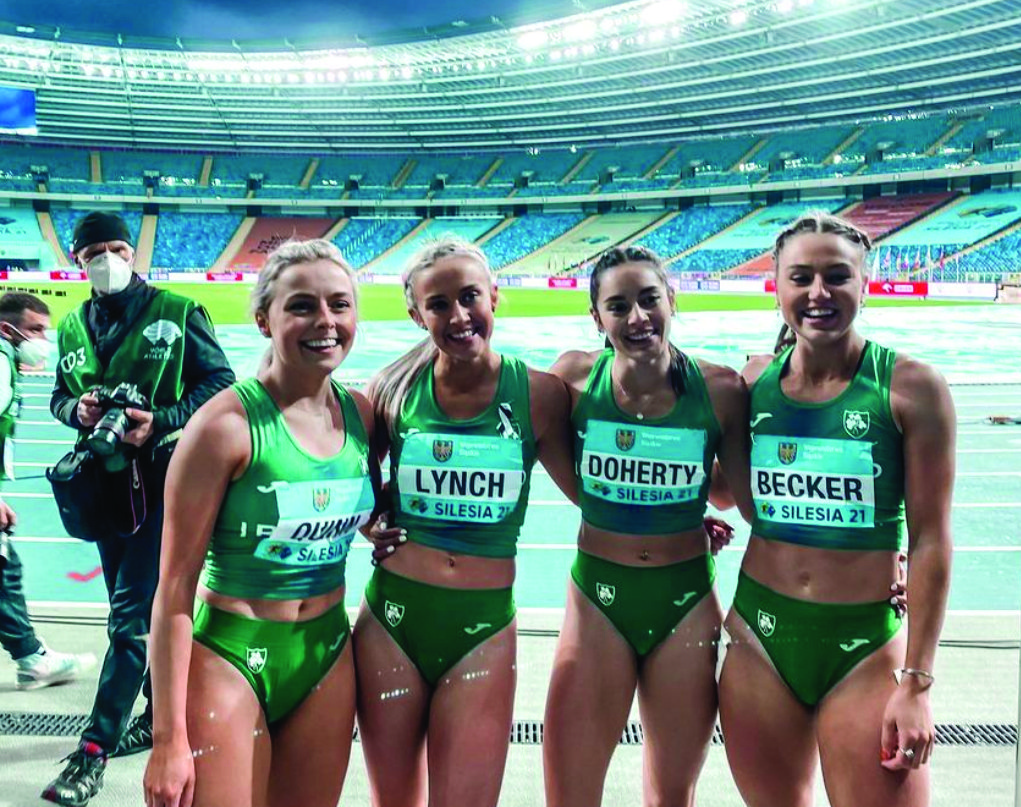 They produced an ultra-smooth performance when it mattered to cross the line in second place in the 4x200m relay a new national record time of 1:35.93 just behind the host nation.

For Doherty, it added to a memorable weekend in which she also helped the 4x100m team to 10th overall, good enough for a place at 2022 World Championships in Oregon.

A couple of days on, she admitted she is still only getting her head around the achievement in what was her first senior international championship.

“It is crazy to medal at senior level and to qualify for a World Championship,” she told the Dublin Gazette.

“The whole by 4×100 team was a team of hurdlers. They are all my competitors individually but we worked together as a team and gelled really well. Our handovers were clean, got the baton around and did all we could given the time [we had together].”

Indeed, in different times, both Doherty and Lynch might not have been in situ for the event but for the serendipity associated with the Covid world which meant much chopping and changing to the line-ups.

For Lynch, she was initially named as a non-travelling reserve but then got the call to join up with the panel.

She anticipated it to be a watching brief but with the mixed 4x400m relay team reaching their final, it meant she was soon thrust into the starter’s blocks.

“I was fine and happy to be a sub,” she told the Gazette. “Then I was called to actually travel with the team, really happy to be there to support the team, practice the handovers and the drills.

“By the end of the week, as the 4×200 got closer, it looked clear we needed someone to step up. That event was kind of designed to allow some of the reserves to run and a chance to get on the track.

“I was so happy to just get that opportunity to run but had no idea it would come to this result which was such an added bonus. I was just thrilled to get to a senior championship, you would never say no to that kind of call-up!”

And it was an extra special occasion as it gave the Castleknock woman the perfect chance to pay tribute to her former coach John Geoghegan who passed away last November. She sported a black ribbon in his memory.

“I was thinking of him the whole day of the race. I just couldn’t get him off my mind. I am good friends with his daughter as well and she said ‘just imagine him looking on in complete awe’.

“He used to tell me he was going to watch me on the telly in a joking way and now here we are, giving him something to be proud of. It was a little gesture for him and I would like to continue it throughout the season.”

Doherty, meanwhile, added this was a triumph for self-belief in the face of adversity.

“It was complicated to get the whole squad there but we got a team there, got a medal and got a World Championship place.

“The 4x200m team was called the morning of the race. We had an idea because of how things fell into place.

As they were in their final, Sharlene Mawdsley and Phil Healy were not available because of their race being half an hour before ours.

“We went into it not knowing what we would get out of it. We just wanted to get the baton around and run our best. We managed to come out second which is amazing with a national record too! It is still exciting; it hasn’t really sunk in yet.”