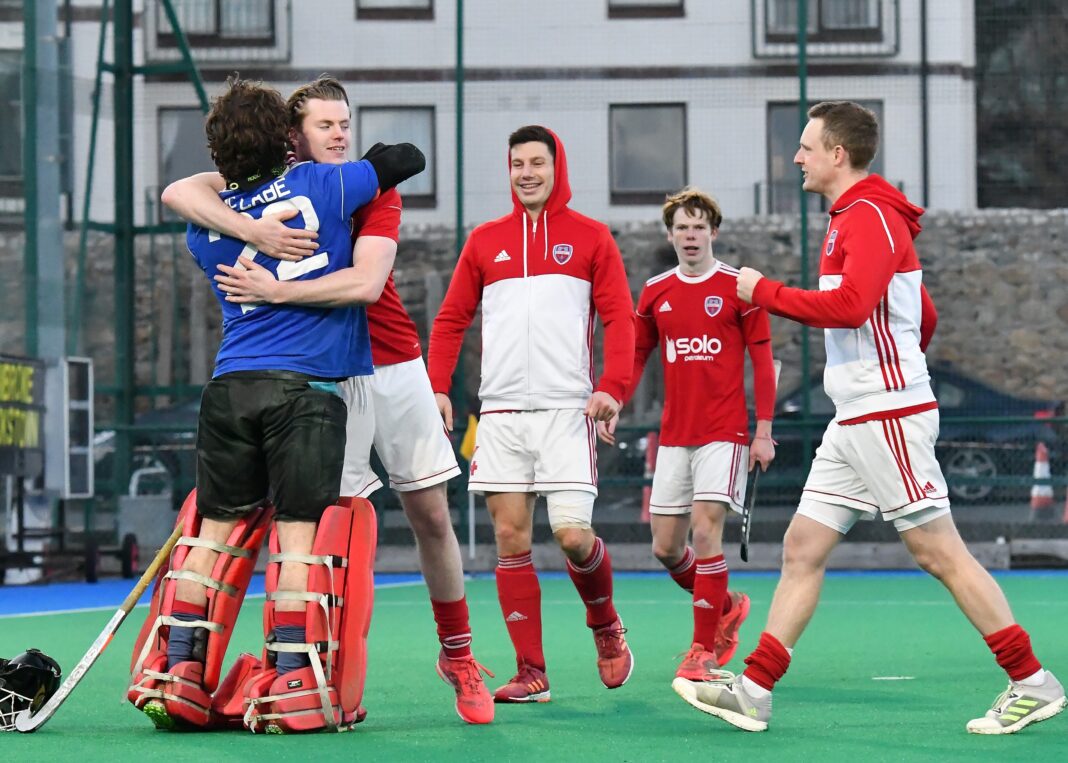 Cookstown continued their hex over Pembroke as they knocked out the Dubliners in the Irish Senior Cup for the second successive campaign, emulating their success in the 2019/20 campaign.

Seventeen-year-old Max Anderson was the hero for the Ulster Premier side, scoring the clinching shoot-out in sudden death after a rollercoaster normal time ended 2-2.

The Co Tyrone side got off to a dream start with two goals in the first seven minutes with captain Paul Thompson driving down the right, finding Ryan Millar on the 90-angle and he calmly found the back of the net.

An electric run from Stuart Smyth set up the second, the midfielder getting into the circle before firing a shot at goal which Scott McCabe got the final touch to.

EYHL side Pembroke bounced back from the rough start and started to find some rhythm with key man Julian Dale causing all manner of problems, winning several penalty corners.

Millar’s running lines, however, kept the two-goal lead in place until half-time before Pembroke’s comeback started in earnest in the second half. Harry Spain did eventually get on the board from a corner drag-flick and it was 2-2 when Greg Chambers cleaned up a fourth quarter rebound from another set piece.

That set up a shoot-out where Pembroke scored their first three efforts to lead 3-1 but Cookstown held their nerve to level at 3-3 at the end of the regulation series of five. In the first round of sudden death, Anderson slotted home before Dale could not make it by Josh McCabe and sent Cookstown through to the final four.

Reds captain Thompson said of the win: “The result keeps up our unbeaten record.”

this season and naturally we are delighted to have got through, especially against an EYHL side.

“The quality of goals in the shootout was high although our keeper Josh McCabe pulled off a couple of good saves.

“Max then kept a cool head to score the winner and that was remarkable as he’s just 17 but he’s just one of several promising youngsters in the squad.

“Our biggest goal this season is to get promoted back into the EYHL but to have a good cup run is great as well.”

Munster Division One side Cork C of I pushed EYHL-high flyers Glenanne all the way but ultimately fell 1-0 in the Irish Senior Cup quarter-finals at St Andrew’s.

In the end, just Shane O’Donoghue’s first half penalty corner stood between the sides as the Garryduff side pushed hard in the second half but could not nab the equaliser.M

onkstown eased into the final four as four first half goals put them on their way to a 4-1 win over YMCA at Rathdown. David Nolan broke the deadlock in the first quarter before a couple of Rory Nichols strikes and one from Guy Sarratt put them well clear.

Grant Glutz got the consolation goal for YM.

The much-anticipated clash between Three Rock Rovers and Lisnagarvey fell foul of a frozen pitch at Grange Road.

Kellie and Katie to duke it out for top boxing award