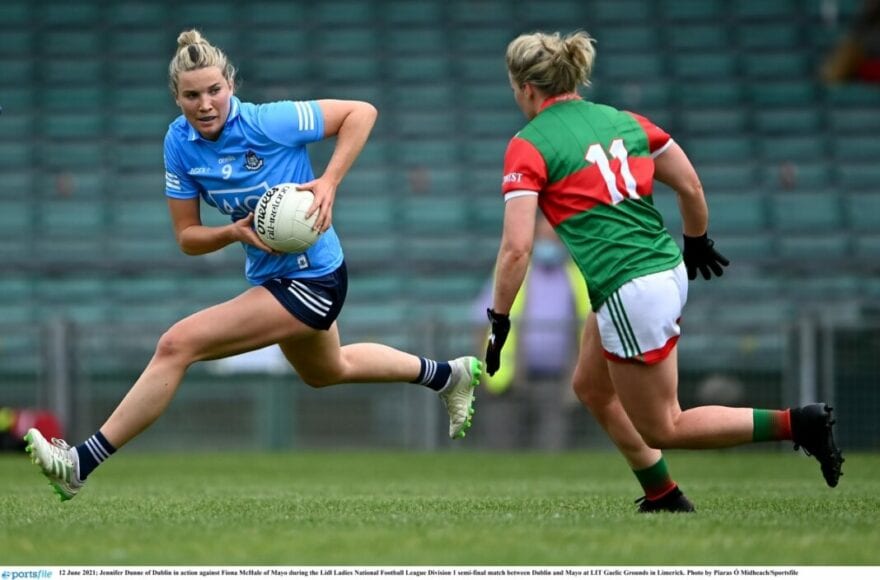 Dublin will face Cork in the Lidl Ladies National Football League Final at Croke Park on Saturday, June 26, after the Jackies cruised past Mayo in their semi-final.

Dublin saw off Mayo’s challenge at LIT Gaelic Grounds in Limerick by 4-15 to 0-10, while Cork emerged 5-10 to 3-13 winners over Donegal at Tuam Stadium.

Dublin led by 3-3 to 0-4 at the break thanks to goals from Niamh Hetherton, Jennifer Dunne and captain Sinead Aherne.

Mayo were unable to get in for a goal which might have ignited a comeback and the All-Ireland champions sealed an impressive win when Aherne slotted home a late penalty.  And Dublin manager Mick Bohan says he is really looking forward to the league final.

“Dublin have only been in one final which is surprising for a county of our size. We’re delighted to be back in Croke Park in a league final. It’s an opportunity for families to come out and see them play.

“We’re delighted to have put up such a big score. It didn’t feel like there was so much between us because they left a lot of handy scores out there,” said Bohan.

Cork manager Ephie Fitzgerald said he is looking forward to getting back to Croke Park to face the Dubs.

“We got a couple of goals at crucial times and I delighted with the way we responded when they came back at us. We made a few changes at half-time and they worked out for us,” said Fitzgerald.

Cork shot 2-2 in the opening four minutes with goals from Brid and Ciara O’Sullivan and Maire O’Callaghan also found the net, but they were level at 3-5 apiece after two goals from Karen Guthrie and one from Kay Herron kept Donegal in contention. Second half goals from Orla Finn and Sadhbh O’Leary were decisive for Cork.

Leinster Senior League: Kilbarrack on fire in 1a Sunday