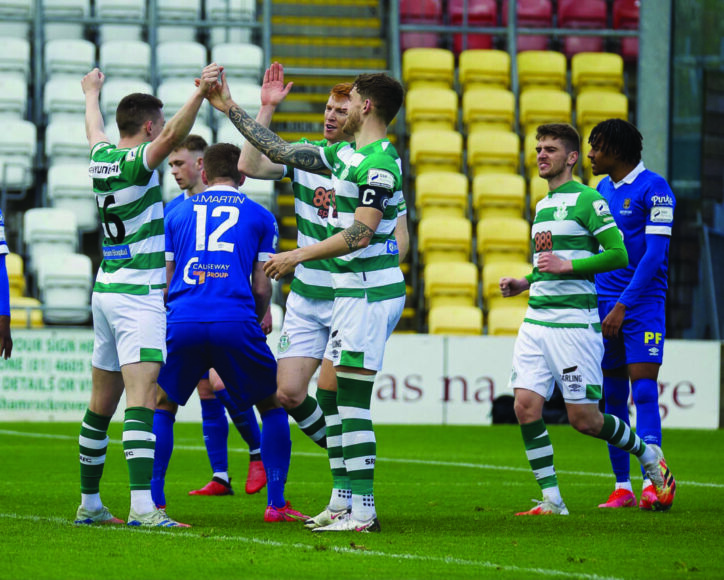 Stephen Bradley saluted his record-breaking Shamrock Rovers side as they became the first team to go 31 games unbeaten in 31 consecutive League of Ireland games.

Rovers coasted to a 3-0 victory over struggling Waterford in Tallaght Stadium to surpass a record set by the Hoops themselves in 1927, and which has stood for the 94 years since.

First-half goals from Rory Gaffney and Gary O’Neill, and a third from Danny Mandroiu early in the second, saw the home side ease to a comfortable win.

Bradley’s side stand at 25 wins and six draws in succession since they were last defeated in the league, a 4-2 reverse away to Dundalk in September 2019 that saw the Lilywhites seal the title.

Only Athlone Town – in 1981 – and Bohemians in 2008 have come close as they strung together 27-game unbeaten league streaks.

Rovers have had a few hairy moments in recent weeks – they scored late to snatch draws at home to St Patrick’s Athletic and away to Sligo Rovers – but never looked under threat on Monday afternoon.

“It is unbelievable from the group as it isn’t an easy thing to do go 31 games. They deserve all the credit they get because it is a fantastic achievement,” said a delighted Bradley.

“It is really impressive and we spoke yesterday about the win ratio as well – it has been a fantastic run from the players but we are nowhere near finished.

“It is only the start of the season and we want to keep this run going as long as possible. Can we keep it going, keep pushing it and maybe make it impossible for another to do it and some point?”

On a wet and blustery Bank Holiday afternoon in Tallaght, Rovers welcomed a Blues side whose fortunes couldn’t contrast more starkly with the invincible Hoops.

Kevin Sheedy was missing nine senior players with injury and could name just four on the bench – one of whom, Shane Griffin, he revealed wasn’t fit to play.

And they never looked likely to recover once striker Gaffney notched his fourth goal of the season with just 12 minutes on the clock.

Referee Adriano Reale ordered an uncontested drop ball after accidentally blocking a Rovers attack. Mandroiu took advantage of the confusion to play the Galway man in and he finished well.

Rovers lost Aaron Greene to injury on the half-hour following a strong Tunmise Sobowale tackle, but they regrouped to add a second from the resulting free kick.

More quick thinking from Mandroiu teed up Dylan Watts, whose first effort was saved by Paul Martin and a second blocked on the line, before O’Neill bundled the loose ball home.

Waterford were denied a stonewall penalty early in the second half as John Martin was hacked down by Sean Hoare – a goal at that point would have offered a lifeline.

There was further concern as Neil Farrugia joined Greene on the injured list as he pulled up with a muscle injury shortly after his introduction, and both will miss Friday’s table-topping clash at Pats.

Bradley finished: “They have started really well and some great players that are playing well. It has all the makings of a really great game and I’m looking forward to it.”